To commemorate the 62nd anniversary of the Munich air crash, the MMMF travelled to Belgrade and then onto Munich. With our plans organised, below is a full account of the trip.

1. To stay at the iconic Majestic Hotel to make a presentation; and
2. To meet the Directors, coaches and children from the charity we support there, FK Studentski Grad.

A small number of close friends accompanied us. Below is a video of the presentation of the commemorative plaque, presented by Pat Burns, Chairman of the MMMF, to Mr. Boza Puaca, General Manager of The Majestic Hotel. Stuart Taylor from the GB Embassy represented our Ambassador, Sian Macleod.We were also joined by our friends from FK Partizan Belgrade and FK Studentski Grad. 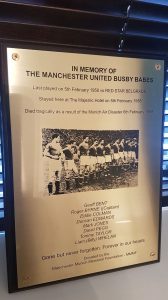 Below is a short video clip and photos of the players wearing the sportswear we recently donated on behalf of MUFC fans. 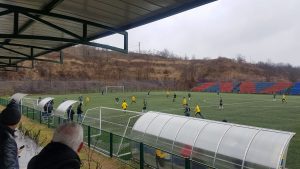 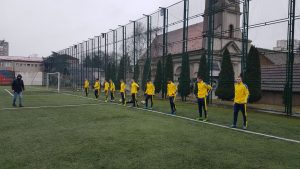 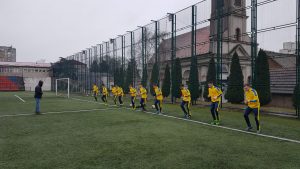 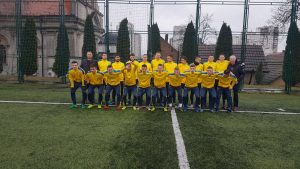 On Wednesday 5th February we arrived in Munich. 4 other MMMF members were there, making 9 of us in total. We were there, along with 400-500 reds, to attend the foundation stone laying ceremony for a new memorabilia showcase at ManchesterPlatz and to commemorate the 62nd anniversary of the Munich Air Disaster.

On Thursday 6th February, the first ceremony started promptly at 2:00p.m. and was superbly attended and respectfully acknowledged by the fans. Organised by Dr. Mark Salzmann of The Red Docs Munich, who led the petition and funding, fans heard from the following people:

The story behind the memorabilia showcase is that in late 2018, The Red Docs Munich (a group of Bayern Munich supporting doctors who work at the hospital nearby and who work tirelessly to keep the memorial site clean and tidy) initiated an online petition to the city of Munich, supported by Bayern Munich FC and The Mayor of Munich, to get permission from the City of Munich to build a glass display at ManchesterPlatz to host and display memorabilia left by visiting fans. This permission was granted in February 2019.

At 2:50p.m. the official memorial service, organised and led by the MMMF, was opened by MMMF Chairman, Pat Burns. After welcoming the official dignitaries from both BMFC and MUFC, the official MMMF fans representatives, Kerry and Zach Rowan were introduced to the assembled gathering.

The ceremony was outlined and started with the fans reps reading out the names of the 23 souls who perished as a result of the disaster. Impeccably observed, fans then joined together in singing “The Pride of Football” before the official 2 minutes silence, again observed impeccably in a respectful and solemn silence by the fans.

Wreaths were then laid by Kerry and Zach on behalf of all fans of MUFC, followed by Andrew Cole on behalf of MUFC and, finally, Joe Tedesco and Joe Glanville from our oldest MUSC supporters branch in Malta. Finally we sang “The Flowers of Manchester” with great pride and passion. Pat Burns then closed the ceremony.

The officials from BMFC, Chairman Rummenigge, President Hainer and Former President Hoeness told the MMMF Chairman Burns that they thought the ceremony was superbly organised and wonderfully and appropriately respectful.

Manchester United F.C., working with the MMMF, sent Club Ambassador Andrew Cole to join us in both ceremonies. He gave a short interview on his feelings and observations of what he had just seen and heard.

If you’d like to make a donation to the MMMF, to help us continue our charitable work, in the memory of The Babes, in Manchester, Munich and Belgrade, please do so via: https://www.justgiving.com/crowdfunding/des-grogan-5

The second ceremony was the annual Supporter’s Remembrance Event. This was attended by 400-500 people and was led by MMMF Chairman Pat Burns.