The MMMF has joined forces with the following organisations to develop a multi-organisational approach to Manchester United FC on the subject of a stand or statue for Jimmy Murphy, to be sited in the confines of the Old Trafford stadium:

We believe, given our collective backing and support for this, coupled with our individual recognition by the club and our respective reputations with the club, that we would stand a much better chance of a successful hearing and outcome. This is an ongoing story which will be updated as and when there is news. Latest updates will be at the top of the list below…

Today, 12th October, representatives from the coalition of six MUFC groups along with members of the Murphy family met with board members and senior officials of the club.

A tour of the stadium footprint was undertaken and the three proposed possible locations for the siting of the statue were reviewed and discussed, including the challenges each one presented.

Our agreed view, and the one the family prefer, is that Jimmy’s statue will be located on a new elevated canopy section at the rear of the Stretford End. This overlooks where Jimmy took 5-a-side with the Babes back in the 1950s. This also affords parity with our two other great managers, Sir Matt Busby and Sir Alex Ferguson..It shows and recognises the direct connectivity to his esteemed contribution in this era (and the post tragedy period)

The club will now prepare to commission the architect and the construction of the statue, based on an image provided by the family, will take place during 2022. It is anticipated that completion and placement will take place sometime next autumn with a target of 14th November 2022 to coincide with Jimmy’s anniversary. 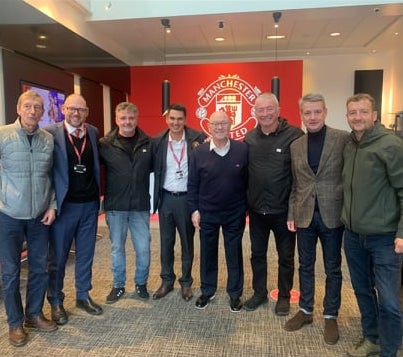 UPDATE: JULY 13th 2021:
As promised, MUFC provided us with a detailed analysis of options for the location of the statue for Jimmy Murphy at Old Trafford. The family have considered the proposed locations and have expressed their views in terms of preference. This has been relayed back to the club and a meeting will now take place to rubber stamp the style/location of site. Having already started discussions with architects, we hope to have an idea of likely timescales for the project very soon.

UPDATE: MAY 28th 2021:
Representatives from the coalition of 6 MUFC groups, seeking recognition for Jimmy Murphy at Old Trafford met with senior club officials on Tuesday 25th May to discuss the exact nature of the recognition. As part of our proposal to the club in the summer of 2020, we included a depiction of what the family would love to see, IF the decision taken was to make any recognition be in the form of a statue.

This position was restated again today by both the coalition representatives and the family.

I am pleased to announce that this is now the agreed and accepted position of all parties. The exact location of the statue and the likely timescales for placement have yet to be fully agreed and endorsed by the Board of MUFC and the owners, so are subject to changes, however we have agreed the following in principle: A statue of Jimmy Murphy, in keeping with the style of existing statues at Old Trafford will be put in place at the stadium.

A number of possible locations around the stadium site were proposed by us and discussed, which are now the subject of ongoing detailed exploration by the club. The club are also exploring potential sculptors who could deliver a quality commission.

Ideally, the chosen siting place will be one where no further relocation would be required. This is the desired objective. The family of Jimmy Murphy are overjoyed with this outcome and, as reds, we should all be pleased for them that Jimmy finally has due recognition at his spiritual home. As previously stated, we as fans all have opinions, but it is the wishes of the family which should be paramount. The club will continue to discuss exact location and timescales with the coalition and the family, once the initial detailed investigation has been undertaken.

On behalf of the coalition and the Murphy family, I would like to express my huge thanks and appreciation to everyone at MUFC who has made this possible.

Pat Burns and Paul Murphy from MMMF talking about the campaign to honour Jimmy Murphy and the next steps:

UPDATE: MAY 8th 2021:
I am delighted to announce that today, 8th May 2021, Manchester United FC have agreed to a permanent form of recognition for Jimmy within the confines of the stadium footprint. The club will not wait for the legacy and heritage Committee to convene to discuss the proposal. They agree to a permanent form of recognition at OT for Jimmy Murphy. It can’t be a stand. It’s likely to be a statue or some equivalent form. It will happen immediately.

Actions speak volumes and this is a huge and momentous occasion. This is a remarkable achievement and should be recognised as an exemplar for how our club has openly and honestly collaborated with us, the fans and former players. Although it has taken some time we should all applaud those involved, both in the club and within the coalition, who have worked together to bring about this result, which I know has delighted the family of Jimmy Murphy.

We, as fans, should be overjoyed that Jimmys family will finally get due recognition for him at his rightful place.

Pat Burns
Chairman, Manchester Munich Memorial Foundation, on behalf of “The Coalition of 6”

UPDATE: APRIL 25th 2021:
Today, 25th April, the MMMF met with our coalition partners from AFMUP, MUST, TRA (The Red Army) , BIGLILY and DEF and as a result a letter has been sent to Ed Woodward to provide an immediate response to our outstanding proposal for recognition for Jimmy Murphy at Old Trafford. The owners have indicated a need and a wish to make amends and rebuild relationships and we respectfully suggest they do just that now via this proposal for Jimmy.

UPDATE: SEPTEMBER 28th 2020:
Pat Burns, Brian Mulholland and Paul Murphy from the MMMF appeared on this week’s All For United YouTube chat show. Watch it below:

UPDATE: AUGUST 19th 2020:
The MMMF ,together with 5 other United fan groups, held a meeting with Manchester United officials on Tuesday 18th August regarding the long overdue recognition for Jimmy Murphy at Old Trafford. The meeting went very well and United will be setting up a “Legacy and Heritage” group to consider proposals .We will keep everyone updated on the progress via the website and Facebook page.

UPDATE: JULY 17th 2020:
The 6 MUFC groups have had a response today from Manchester United agreeing to discuss our proposal for recognition for Jimmy Murphy at Old Trafford as part of a new Heritage & Legacy Committee that the Club are setting up. Encouraging news. John Gubba explains more: